skip to main | skip to sidebar

What will it take?

While reading Exodus and learning about how God led the Israelites out of slavery in Egypt I quickly saw a strong parallel to my everyday life that I wanted to share. Maybe you can relate.

The story is one you have probably heard but basically God instructs Moses to lead the Israelites out of slavery in Egypt. He shows the Pharaoh his mighty power by performing huge acts such as turning the Nile river into blood, creating a massive hail storm, creating infection amongst the people and the list goes on all in an attempt to free the Israelites. What I find very interesting and relevant to my life was the constant refusal of God by the Pharaoh, even when God made his power so obvious. This, to me, is similar to how I am often unwilling to give up my sense of control in my own life and submit to God even when He shows me how real He is. Often times I feel as though obeying and following God means that I can no longer be how I want to be. God, on multiple occasions, showed His ability and power to the Pharaoh and each time the Pharaoh would plead for God to relent. However, each time God would ease up, the Pharaoh would then return to his wicked ways and not hold up his end of the bargain. It almost as if God did not exist when He was no longer needed. Have you ever pleaded with God and then quickly forgot about your promise to God? Have you ever promised God in prayer that you will never do "that thing" again if he just let you make it through?

As the story continues the Pharaoh decides to send his army to regain control of the Israelites that just escaped. God parts the Red Sea allowing the Israelites to cross to the other side by dry land. When the Egyptians attempt to chase after them, the sea converges on them and they all drown. Now clearly if something of this magnitude happened in anyone's life, believer or not I think it would be hard to not put their faith in God. It is not every day that a sea is parted before your eyes to save your life and defeats your enemy. Now we see the Isrealites forget about what God has done for them and turn. 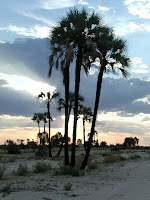 Within three days of the parting of the sea and them being freed, the Israelites are faced with a relatively small amount of adversity as they become thirsty. They immediately forget about where God has lead them and begin to complain. Could they really think that God could part a sea but not provide water to quench their thirst? Has God ever performed miraculous acts in your life and yet you have doubted Him in much smaller instances? Of course God hears their cries and provides an abundance of water. The bible actually says that God takes them to a place called Elim where there are twelve springs and 70 palms; basically paradise. What a surprise!

Does this sound like a familiar story? This is the story of my life. God is all around me in every way, answering my prayers and the prayers of others in my life. He punishes me in obvious ways when I disobey, showing me He cares. He rescues me when I am being chased. Once I get what I need I quickly turn back in my old ways and forget what He has done for me.

What will it take? What more do we need to see to have total faith in Him?

tryin' to make sense of it all
-EC
Posted by Eric Carvajal at 10:11 AM

Eric Carvajal
Thanks for reading my blog! I am an entrepreneur in Austin, Texas. I was actually born in Galveston but spent the majority of my childhood in San Antonio. A graduate from The University of Texas at Austin, I started a real estate company called The Carvajal Group, focused on helping people find a place to live. Now our company does that and so much more!

I truly believe in my heart that we must all help each other in any way that we can. This blog is dedicated to just that. I will do my best to inspire and share postive thoughts and attitudes about life. Please know that I do not claim to live a model or perfect life and, in fact, most of the things I will be blogging about will be things that i personally need to improve in my life. But hey, we are all in this together so help a brother out!
If you have any ideas or stories you would like to share you can always shoot me a quick email. Thanks for reading!